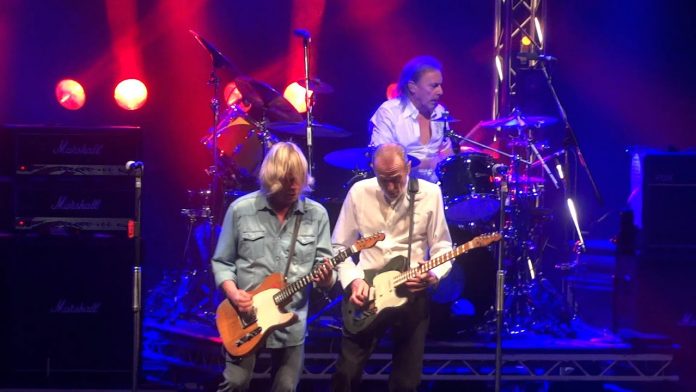 Whatever You Want by Status Quo. Written by Rick Parfitt and Andy Bown, it was released on the album of the same name in 1979 and has become one of the band’s better-known works.

It originally appeared on the band’s 1979 album Whatever You Want and was later re-recorded for their 2003 album Riffs.

Note the tuning for Whatever You Want is Drop D tuning

Believe it or not I am a big Status Quo fan. The songs where some of the earliest songs I ever learned and my first ever gig in a band was as rhythm guitar in a Quo tribute band.

Whatever You Want commences with a quiet introduction, containing a guitar playing notes from chords. Rick Parfitt and Francis Rossi used chorus, fuzz and flanging effects on their guitars. This lasts for approximately 26 seconds, and fades out towards the end. After this, the guitar picks up once more with a D-minor riff, and 40 seconds into the piece, the familiar D-major riff of the song begins, accompanied by drums from the 56 second mark.

At 1 minute, 11 seconds, all audio pauses for approximately half a second; at this point, the lyrical portion commences. The music returns as soon as the first lyrics are heard. This pause creates a short-lived dramatic start to the song, which lasts for a total of four minutes.

The song is guitar-oriented, like most Status Quo songs. During recording up to three guitar ‘layers’ were used, though it can be played with two: rhythm guitar and solo guitar. The other instruments are a bass guitar, keyboards and drums. The lyrics are multi-vocal; for instance the ‘Whatever you want’ part is sung entirely with two voices.

The guitar low ‘E’ string is tuned to a D (the song is in the key of D). This is required to play the intro and also the low strumming after the intro. In this later part a flanger effect is used together with the ever-present overdrive/distortion effect.

Within the United Kingdom, the song reached number 4 in the UK Singles Chart in 1979.

The song has been used in advertising campaigns by popular UK retailer Argos and Ireland based The Gift Voucher Shop which sells the One4all gift vouchers and gift cards, as well as being the theme tune to an ill-fated Saturday night TV show of the same name as the song.

It was also parodied in a 1990s advertisement for the now defunct retailer What Everyone Wants, singing the store’s name in place of the original song title. In 2008, the song was sampled on the hardstyle song “1980” by Citizen, and then later that same year by German techno band Scooter on the song “Jump That Rock (Whatever You Want)!” from the hit album Jumping All Over The World.

The song has also featured albeit in a modified form for the Australian Supermarket chain Coles. The South African trio Mark Haze (from Idols South Africa season seven), Dozi and Ghapi recorded a version on their album “Rocking Buddies” in 2013.

If you enjoyed the lessons why not sign up for a free online guitar lessons with me.

Status Quo - Whatever You Want Intro

How To Play What Your Proposing By Status Quo