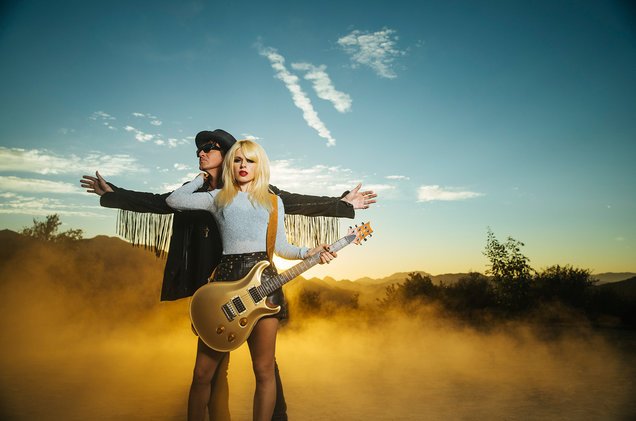 Richie Sambora Talks Bon Jovi Reunion at Rock Hall of Fame: ‘Everybody Falls Back Into Place’

There’s no heartbreak quite like watching your favorite band split. But Bon Jovi die-hards will get the rare chance to turn back time on April 14, when former guitarist Richie Sambora reunites with the original lineup of the arena-rock greats, five years since his abrupt mid-tour departure from the group, to perform at their Rock and Roll Hall of Fame induction in Cleveland, Ohio.

“Everybody falls back into place,” says Sambora of the “joyous occasion,” which will also see the return of former bassist Alec John Such, who left the band in 1993. As part of the Rock Hall’s 2018 class, they’ll join The Cars, Dire Straits and The Moody Blues, along with posthumous inductees Nina Simone and Sister Rosetta Tharpe.

It’s a big month for Sambora, who will also spend the coming weeks alongside longtime girlfriend Orianthi — a fellow shredder who has shared stages with the likes of Santana, Prince, Alice Cooper and Michael Jackson — prepping their debut album as duo RSO. The project, Radio Free America, launches May 11, featuring an eclectic mix of blues, rock and even country-tinged tracks recorded from their home studio in Calabasas, Calif. Ahead of the album’s release and Bon Jovi’s induction, RSO is set to headline the Rock and Roll Hall of Fame’s Celebration Day on April 7.

Below, Sambora explains what it’s been like to rehearse with his former bandmates and why he tried “not to get too excited” about the Rock Hall nomination and more, while Orianthi jumps in to share details on the duo’s upcoming album.

Richie, congratulations on the Rock and Roll Hall of Fame induction. How did you find out the news?

Richie Sambora: There were murmurings that came through about a week before the announcement or so, and I was not trying to get excited about it — because I figured, you never know. We’ve been nominated before [in 2011]. I had kind of put it out of mind, because we were looked over by the grand forefathers of the Hall of Fame until this year. But I figured that, you know, one day, I’d get in. Maybe I’d be dead, but I’d still get in. [Laughs.]

Rock and Roll Hall of Fame is a milestone, without a doubt. Like I said, I’ve tried not to get too excited about it for a long time, but I’m starting to get excited about it. I’m glad that I’m actually alive to get in there.

Bon Jovi received the most fan votes out of any other nominee — over one million. What does that mean to you?

What has it been like rehearsing with the rest of Bon Jovi? It must bring back memories.

RS: We played live to millions of people over 31 years. Do I miss it? No — but the memories are good. It feels great to see everybody. We already rehearsed and it was wonderful, it wasn’t awkward. The chemistry came back very quickly; it’s matrixed into our muscle memory at this point. If you’re on the road performing and touring for 30 years, [the Rock Hall ceremony] is just another cycle — and it’s a good one, so here we go.

Orianthi, you and Richie met not long after he departed the band. What does this award mean to you, as a fellow musician?

Orianthi: I’m just stoked that Richie’s getting it. I’m really proud of him. I think it’s awesome. Obviously all the songs that Richie and they wrote, they were incredible songs that are the soundtrack to a lot of people’s lives. I think it’s going to be a really special moment.

Traditionally, all inductees get together for an all-star jam session to close out the ceremony. Richie, are you looking forward to playing alongside some of the other inductees?

RS: Yeah, of course! [Mark and David] Knopfler [from Dire Straits] and [Ric] Ocasek [from The Cars] and stuff. Definitely. Are you kidding me? That’ll be a good time. Like any time, a joyous occasion. That’s the thing that I think we were put on this planet as musicians and writers and entertainers [to do], to bring joy to people, so that’s what we’ll do. That’s why we got in this business.

Let’s talk about RSO. Your first full album as a duo, Radio Free America, is out in May.

RS: Basically, it’s a combination of two EPs and a bunch of new songs that we’re gonna put on there for the people. It’s gonna be our first release as RSO as a full record instead of an EP. There’s an accompanying PBS special that we’re working on right now.

What does the title mean?

RS: If you listen to our record, there’s so many genres of music, but they’re all cohesive. We had the freedom to do that. I was thinking about the concept of Radio Free Europe during WWII. Radio Free Europe brought a lot of the news to troops and people who were on the verge of defecting. They were getting music and they were getting news. I was thinking about how all that rolls around, and the fact that, in America, we have the freedom to choose what kind of music we want to play.

Orianthi: The whole record is pretty diverse. We’re both blues-based players. I love country music because of the storytelling aspect of it, so we have a bit of country going on there, rock, elements of pop — all different stuff. It’s a journey, in a way. I just hope people dig it.

Are you still recording in your home studio?

Orianthi: All the time. Richie and [Bon Jovi producer] Bob [Rock] and myself will sit around and come up with different stuff — it’s always fun.

RS: Ori’s always cooking. It’s amazing that me and all the musicians who have been on this record are not fat, because Ori is an amazing cook. It’s like a smorgasbord of everything every day.

Orianthi: You know why? It’s because I cook damn healthy. Everything is healthy, even if I’m making burgers.

One more question about the Hall of Fame, Richie. Since we’re talking about your home — where are you going to store your award?

RS: Well, I keep my Grammy and my Songwriters’ Hall of Fame [award] sitting on a Steinway, so there’s no room on that anymore. I’ll have to figure out someplace else. What a problem! Woe is me! [Laughs.​] I don’t know yet. We’ll see.