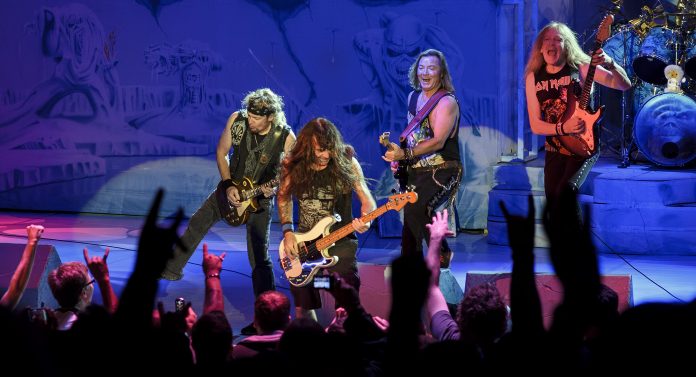 Seventh Son of a Seventh Son is the title track from Iron Maiden’s seventh studio album, released on 11 April 1988.

The song is nearly 10 minutes long so this is a very long lesson with lots to cover.

The idea to base the album around the folklore concept of the seventh son of a seventh son came to bassist Steve Harris after he read Orson Scott Card’s Seventh Son. Harris states, “It was our seventh studio album and I didn’t have a title for it or any ideas at all. Then I read the story of the seventh son, this mystical figure that was supposed to have all these paranormal gifts, like second sight and what have you, and it was more, at first, that it was just a good title for the seventh album, you know? But then I rang Bruce and started talking about it and the idea just grew.”

After his songwriting contributions were rejected from the band’s previous album, 1986’s Somewhere in Time, Dickinson felt that his role within the band had diminished, as he “just became the singer”, but felt renewed enthusiasm when Harris explained the concept to him; “I thought, ‘What a great idea! Brilliant!’ And of course I was really chuffed, too, because he’d actually rung me to talk about it and ask me if I had any songs that might fit that sort of theme. I was like, ‘Well, no, but give me a minute and I’ll see what I can do.’ Speaking about the record in later years, however, Dickinson remarked that “we almost did [something great]”, explaining that, “it was only half a concept album. There was no attempt to see it all the way through, like we really should have done. Seventh Son… has no story. It’s about good and evil, heaven and hell, but isn’t every Iron Maiden record?”

The album has received consistent critical praise since its release, with AllMusic rating it 4.5 out of 5, saying that the addition of keyboards “restores the crunch that was sometimes lacking in the shinier production of the previous album” and that it “ranks among their best work”. Sputnikmusic scored the album 4 out of 5, and, while they state that “the band has better releases, such as Powerslave and Somewhere in Time“, they argue that it is “lyrically … one of Maiden’s finest efforts”. In 2005, the album was ranked No. 305 in Rock Hard magazine’s book of The 500 Greatest Rock & Metal Albums of All Time. The album ranked #11 in Loudwire magazine’s list “Top 25 Progressive Metal Albums of All Time.”