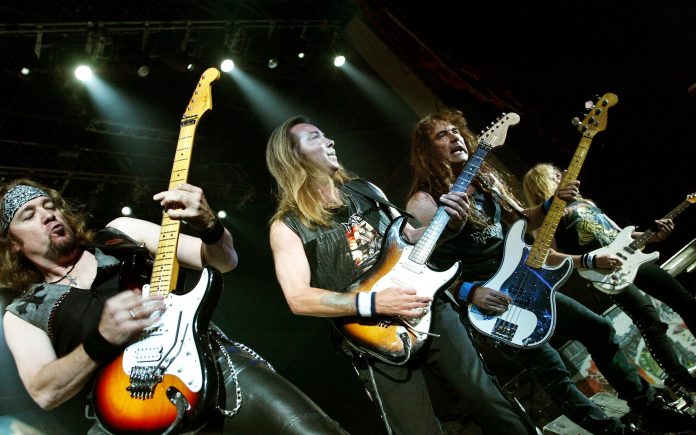 Holy Smoke by Iron Maiden. It is the first single release to feature guitarist Janick Gers, who joined the band in mid-1990.

Holy Smoke was released just weeks before the album, No Prayer for the Dying, and climbed to number three on the UK Singles Chart.

The song is atypical for the band standards, being short and straight. It features a common pop-rock song structure with intro, verse, chorus, verse, chorus, solo, verse and ending with another chorus. The guitar solos are very fiery, making use of artificial harmonics, sweep picking, tapping and wild bends. The first solo is played by Janick and second one is played by Dave Murray.

The song deals with the many televangelist scandals that took place in the United States in the late 1980s, including mentions of “Jimmy the Reptile” (a reference to Jimmy Swaggart), “The TV Queen” (a possible reference to Tammy Faye Bakker), Noah, and “plenty of bad preachers for the Devil to stoke.” Contrary to what some believe, however, this song is not aimed at the Christian religion itself, but rather the people that abuse it to make gains for themselves. This is one of the very few Iron Maiden songs with profanity in the lyrics (for example, “Flies around shit/bees around honey” and “I’ve lived in filth/I’ve lived in sin/and I still smell cleaner than the shit you’re in“), which is replaced by gunshot sounds in censored versions.

The band took a humorous approach for the video of the song, as the band members are filmed on Steve Harris’s farm at Sheering, playing football and driving a tractor, while everything happens in bright daylight. There are similarities with Deep Purple’s Perfect Strangers video, from 1984, such as writing on an amp behind Janick that reads, “Mind Your Head”, possibly a nod to a sign on the bridge shown early in the Perfect Strangers video. Bruce Dickinson is bouncing in a turnip field, dancing randomly and wearing a pink T-shirt, Dave Murray appears playing guitar with his feet in a creek, and Janick Gers plays with a toy guitar in a swimming pool wearing only a pair of white swimming trunks, alternating with him in a goalkeeper kit playing his own guitar.

The band’s producer, Martin Birch, can also be seen on the video, wearing a kind of sadomasochist costume in some scenes. All this footage is interspersed with scenes of the band rehearsing in the Barnyard recording studio. The video was directed by Harris himself.

How To Play Man On The Edge By Iron Maiden

How To Play Man On The Edge By Iron Maiden

0
Man on the Edge is a single from the Iron Maiden album The X Factor released in 1995. Man On The Edge is based on...
Iron Maiden Guitar Lessons

How To Play The Loneliness Of The Long Distance Runner By...

0
The Loneliness Of The Long Distance Runner is from the sixth studio album Somewhere In Time. It was released on 29 September 1986. How to...
Iron Maiden Guitar Lessons

0
22 Acacia Avenue is a track from the album The Number of the Beast which is the third studio album by Iron Maiden. It...
Iron Maiden Guitar Lessons

How To Play No Prayer For The Dying By Iron Maiden

0
No Prayer for the Dying is the title track from the eighth studio album by Iron Maiden. It marks their first line-up change since...
Iron Maiden Guitar Lessons

0
"Sanctuary" is the second single released by Iron Maiden. The single was released on 23 May 1980. Learn to play Sanctuary, Although originally issued as...