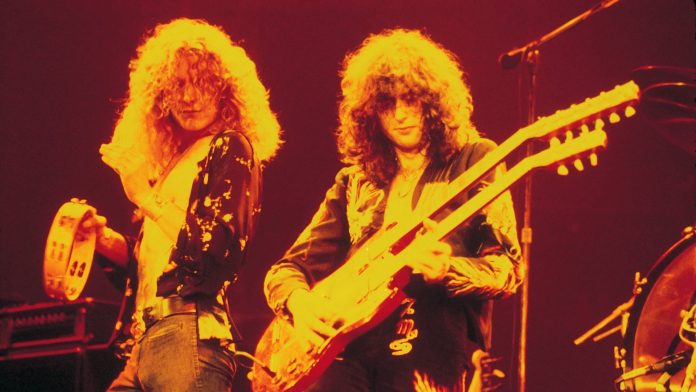 Quite probably the greatest song ever written by Led Zeppelin. I know everyone raves about Stairway To Heaven, but for me this song is a masterpiece. Great guitar, powerful hard hitting drums, stunning vocals and a great bass line. What else is there to say.

Its a hard song to perform due to the huge amount of guitar overdubs but i have tried to cover some of the better ones in this lesson.

Guitarist Jimmy Page and singer Robert Plant began writing it in the summer of 1975 and were influenced by Eastern music, mythology, and travels. At ten and a half minutes, it is one of the group’s longest studio recordings and one of their most complex, with different interwoven sections and multiple overdubbed guitar parts. It was released in March 1976 as the opening track for their seventh studio album, Presence.

The song received positive reviews, with comparisons to other epic-style Led Zeppelin songs, such as “Kashmir”. Between 1977 and 1980, it was a feature of the group’s concerts and a live performance from 1979 is included on the Led Zeppelin DVD (2003). In several interviews, Page named it as his favourite Led Zeppelin piece and places his guitar solo on a par with “Stairway to Heaven”.

The song opens with solo guitar arpeggios by Page that gives it a haunting or mysterious sound. Drummer John Bonham and bassist John Paul Jones then come in and establish a driving rhythm, that they pursue throughout the piece. After the long intro riff is played four times, Plant begins singing. His vocal sections are broken up by brief instrumental passages and Page adds the first of many overdubbed guitar parts.

At 3:42, the song shifts and Page plays his first solo] Besides a change in tempo, the section also includes breaks and a switch to 5/4 time (the rest is 4/4). When the song returns to the vocals, Page adds more guitars. After a brief slide guitar part, Plant enters into an Eastern-influenced scat-style vocal section. At 8:25, Page plays a second solo with yet more overdubbed parts and a minute and a half later, the song winds down with chording that echoes the opening.

After extensive rehearsals in Los Angeles, Led Zeppelin traveled to Munich, Germany, to record Presence at the Musicland Studios. They recorded the basic tracks for “Achilles Last Stand” during the early sessions on 12 November 1975] For the first time during a recording, Jones plays an eight-string bass guitar with a pick. He explained that it added more mid-range presence during Page’s high-register soloing and that while Page objected at first, he quickly saw its effectiveness.

Without the rest of the group, Page recorded all of the guitar overdubs in one evening. He later commented: “There must be half a dozen going at once. I knew that every guitar overdub had to be very important, very strong within itself to identify each section.” Recording for Presence was completed on 27 November 1975, 15 days after the group laid down the basic tracks for “Achilles Last Stand”.

How To Play Flash Of The Blade By Iron Maiden

0
Flash Of The Blade was released on Powerslave which is the fifth studio album by Iron Maiden, released on 3 September 1984. The song "Flash...
Iron Maiden Guitar Lessons

How To Play No More Lies By Iron Maiden

0
No More Lies by Iron Maiden was released on 29 March 2004 as part of the Dance of Death album which was the thirteenth...
Iron Maiden Guitar Lessons

How To Play Killers By Iron Maiden

How To Play Prowler By Iron Maiden

0
Prowler is the opening track from the self titled debut album by Iron Maiden released in April 1980. Prowler guitar lesson is a long lesson...
Iron Maiden Guitar Lessons

How To Play Wrathchild By Iron Maiden

0
This lesson looks at the main guitar parts played by Dave Murray from the song Wrathchild released on the 1981 album Killers. Killers is the...