In this lesson you will learn how to play double stop bends.

Double Stop Bends – This technique has been used by many artist over the years, the two songs we will feature in this lesson are Night Crawler by Judas Priest and Run To The Hills by Iron Maiden. I am sure by the end of this lesson you will be able to name many more.

So what is a double stop bend?

It is a technique where a note on a string is raised by bending the string until it shares the same pitch as played on the adjacent string, it actually feels like you are tuning the lower string to the higher string. Which in reality, is exactly what you are doing. The most common form is to play the High E string and the B string and bending the note on the B string. 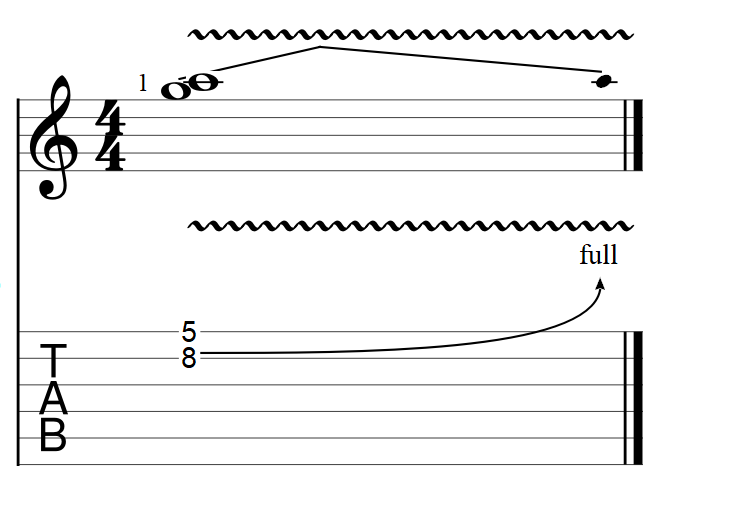 The motion of the bend gives expression to your playing and adding some vibrato to the bent note really makes for an exciting sound. The distance between the fretted notes is 3 frets.

Watch the video to learn how to move around the fret-board using the double stop bend and learn the sections of two classic songs that use this technique.

KK Downing recorded a powerful intro section to the song Night Crawler using double stop bends. The bends should be sharp and precise.

Notice in this song the use of the rest, these allow you to mute the string between moves so the bent string doesn’t go flat as you switch position.

Run To The Hills – Iron Maiden

Possibly the most recognizable song that uses double stop bends, The song has two lyrical themes, in the supporting video released by Iron Maiden the double stop riff is played over the section depicting the viewpoint of the Native American Indian.

The initial part of the riff is very similar the Night Crawler, however on bar 4 the double stop moves down to strings G and B. Also not that the distance in frets between the notes is now only 2 frets due to the standard tuning of the guitar. The drop on the bended note in each bar is caused by the movement of the fingers to the next position on the fretboard. The sound can be heard but is heavily muted so as to not sound out of tune.

The double stop bend can be used in numerous ways. Because the string are basically playing the same note you can apply this technique across any scale to create interesting melody’s and add an extra dimension to your playing.

If you enjoyed this lesson then check out the full lesson for Night Crawler by Judas Priest on my Premium Channel. https://premium.skypeguitarlessonsonline.com/courses/night-crawler

Gsinker - January 25, 2019 0
Understanding chord inversion on the guitar, this is an ideal beginners guide to the use of chord inversion and how to use them. To fully...
Intermediate Lessons

How To Play Crazy Crazy Nights By Kiss