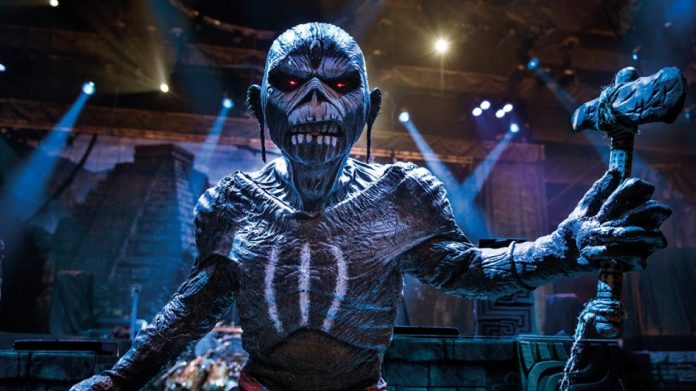 The Number of the Beast by Iron Maiden. Was Iron Maiden’s seventh single release, and the second single from their 1982 studio album of the same name.

How to play The Number Of The Beast. This lesson looks at all the guitar parts played by Dave Murray & Adrian Smith.

Upon release in 1982, the song caused controversy in the United States where its religious subject matter caused outrage amongst religious groups. In spite of this, it remains one of the band’s more popular songs, reaching No. 18 in the UK singles charts on its original release, and No. 3 on two successive occasions in 1990 and 2005. It has been performed on almost all of their concert tours. Additionally, the song has been covered numerous times and has appeared in several video games and films.

The Number of the Beast was a commercial success, with The New York Times reporting in 2010 that 14 million copies have been sold worldwide. It was the band’s first record to top the UK charts, entering the Top 40 directly at No. 1 on 10 April, maintaining the top position for a further week, and then remaining in the Top 75 for a total of 31 weeks. It entered the Billboard 200 at No. 150 and went on to peak at No. 33. In addition, the album reached the Top ten in Austria and Sweden, and No. 11 and No. 13 in Canada and Norway, respectively.

It was awarded platinum by the British Phonographic Industry (BPI), and received a gold certification by the Recording Industry Association of America (RIAA) on 4 October 1983 (eventually going platinum in 1986). The album reached No. 11 in Germany and was certified gold ten years later, and it received a 3x platinum award in Canada for sales exceeding 300,000 units.

The two singles, “Run to the Hills” and the title track, debuted in the UK single charts at No. 7 and No. 18, respectively. Both songs entered the Irish Singles Chart in the same order, and reached No. 16 and No. 19.

The guitar solo by Dave Murray and Adrian Smith are available in the Premium Channel. I have also included the tablature and a backing track.

To access the Premium Channel please click here. Then select Iron Maiden in the drop down menu.

Other songs covered from the album are:

Hallowed Be Thy Name

Children Of The Damned

How To Play Childhood’s End By Iron Maiden

How To Play Transylvania By Iron Maiden

0
"Sanctuary" is the second single released by Iron Maiden. The single was released on 23 May 1980. Learn to play Sanctuary, Although originally issued as...
Iron Maiden Guitar Lessons

How To Play Childhood’s End By Iron Maiden

0
Childhood' End was released in 11 May 1992, on the album Fear Of The Dark. It was their third studio release to top the...
Iron Maiden Guitar Lessons

How To Play Transylvania By Iron Maiden

0
Released on the album Iron Maiden on 14 April 1980 in the UK. Transylvania is a instrumental track and features Dave Murray and Dennis...
Iron Maiden Guitar Lessons

How To Play Flash Of The Blade By Iron Maiden

0
Flash Of The Blade was released on Powerslave which is the fifth studio album by Iron Maiden, released on 3 September 1984. The song "Flash...
Iron Maiden Guitar Lessons

How To Play No More Lies By Iron Maiden

0
No More Lies by Iron Maiden was released on 29 March 2004 as part of the Dance of Death album which was the thirteenth...