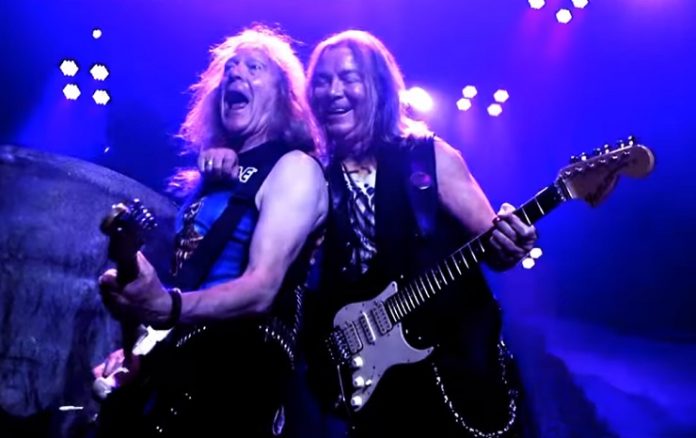 Tailgunner is the opening track from Iron Maiden’s 1982 album, No Prayer For The Dying.

Tailgunner was the opening track from Maiden’s 1982 album, No Prayer for the Dying, their  eighth studio album. It marks their first line-up change since 1982; guitarist Adrian Smith left the band during the pre-production phase, unhappy with the musical direction it was taking, and only having contributed to one song, “Hooks in You”.

A sequel to Maiden’s 1984 song “Aces High.” Tailgunner depicts the battle from another perspective. It was co-written by Bruce Dickinson and Steve Harris.

Tailgunner is about the horrors of the bombing campaigns during World War II. A tailgunner is the crew member who typically sits in the rear of a bomber and attempts to protect the aircraft from being attacked by enemy fighters flying in from behind.

Although it received generally mixed to negative reviews, the album peaked at No. 2 in the UK Albums Chart and contains the band’s only UK Singles Chart No. 1, “Bring Your Daughter… to the Slaughter“.

The album departed from the keyboard- and synthesiser-saturated progressive rock direction of the band’s two previous studio outings (1986’s Somewhere in Time and 1988’s Seventh Son of a Seventh Son) in favour of a more “stripped down,” straightforward style, reminiscent of the band’s earlier material, which ushered in a change of vocal style for Bruce Dickinson from the operatic sound of the 1980s to a raspier way of singing. The idea to make a more “street level” release also inspired the band to record in a barn on bassist Steve Harris’s property in Essex, using the Rolling Stones Mobile Studio. This means it is the first Iron Maiden album to be recorded in their home country since 1982’s The Number of the Beast. Dickinson states that this idea was a mistake, commenting that “It was shit! It was a shit-sounding record, and I wished we hadn’t done it that way. At the time, I was as guilty as anyone else in going, ‘Oh great! Look, we’re all covered in straw! What a larf!'”

The album also departed from literary and historical lyrical themes in favour of more political content, with songs focusing on religious exploitation (such as in the record’s first single, “Holy Smoke“) and social concerns (“Public Enema Number One”). No Prayer for the Dying is the only Iron Maiden studio album to date without a song exceeding six minutes in length and the second one to contain profanity in the lyrics, the debut album being the first to do so. It was also the band’s first release with Epic Records in the US, after the band left Capitol Records, but was sold through EMI for all territories outside the US. Despite charting well in most countries, particularly in the UK where it debuted at No. 2, it would be the band’s last album to receive gold certification in the US.

0
Run Silent Run Deep is a track from the album No Prayer for the Dying, the eighth studio album by Iron Maiden. Released in...