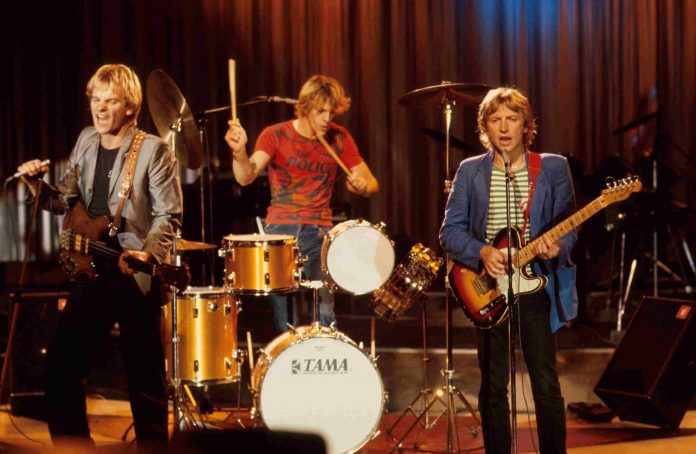 Roxanne by The Police. The song was written by lead singer and bassist Sting and was released in April 1978 as a single from their debut album Outlandos d’Amour.

It was written from the point of view of a man who falls in love with a prostitute. On re-release in 1979, the song peaked at  No. 12 on the UK Singles Chart

The Police lead singer Sting wrote the song, inspired by the prostitutes he saw near the band’s seedy hotel in Paris, France, where the Police were lodged in October 1977 to perform at the Nashville Club. The song’s title comes from the name of the character in the play Cyrano de Bergerac, an old poster of which was hanging in the hotel foyer.

Sting had originally conceived the song as a bossa nova, although he credits Police drummer Stewart Copeland for suggesting its final rhythmic form as a tango. During recording, Sting accidentally sat down on a piano keyboard in the studio, resulting in the atonal piano chord and laughter preserved at the beginning of the track. The Police were initially diffident about the song, but Miles Copeland III was immediately enthusiastic after hearing it; he became their manager and got them their first record deal with A&M Records.

We went into Surrey Sound Studios and it was working pretty well. We recorded a few tracks, one of which I wrote more or less as a throwaway. That was ‘Roxanne’, I didn’t think much more about it until we played the album to Miles Copeland who is, of course, Stewart’s brother and a bit of an entrepreneur, though he’d never been particularly interested in The Police. In fact, he’d kept away from it to say the least. He did come along to the sessions while we were putting the first album together but more or less just to offer brotherly advice to Stewart. He heard the album and quite liked it. When we got to Roxanne, we were a bit embarrassed because the song was a bit of an anachronism, because compared with our usual material it was slow, quiet and melodic. Far from saying he thought it was a piece of shit, he said it was amazing. I thought, ‘He likes this song. This is fantastic!

According to Andy Summers:

Sting played it for me in my living room early on. He was very shy at first bringing in his songs. But it was brilliant, and later on we all worked it out in a damp basement in North London. I remember Stewart telling Sting where to place the bass notes, which was a bit tricky. Miles Copeland came down to hear us and we were kind of embarrassed to play it for him, because Miles had blinders on and was into fast and furious punk. But much to his credit, he said, ‘This is great, a knockout!’ I was really surprised. And he took it to A&M and got a contract for one single. I don’t think it ever broke the Top 40 in America, but eventually it became the Police signature tune.

“Roxanne” became the band’s debut single for A&M Records. However, despite the praise given by Miles Copeland, the single did not chart upon its initial release. Writing in Record Mirror, singles reviewer Bev Briggs declared “This must be the big breaker for The Police …. what the hell, go out and buy it immediately”.

The band released two further singles in the UK that year: “Can’t Stand Losing You”, which charted at number 42, and “So Lonely”, which did not chart. Then, in early 1979, “Roxanne” was issued in North America as the group’s first single there. In the US, “Roxanne” entered the Billboard Hot 100 in February 1979 and peaked at  No. 32 in April. In Canada, the single placed one rung higher on the charts, peaking at  No. 31.

The song’s international success spurred a UK re-release of “Roxanne” in April 1979, which reached  No. 12 in the UK Singles Chart. A live solo version performed by Sting from the 1982 album The Secret Policeman’s Other Ball received moderate airplay on album-oriented rock radio and reached  No. 28 on the Billboard Top Tracks chart. The song went on to become a staple of Sting’s performances during his solo career, and it was performed when The Police reunited in 2003 for their induction into the Rock and Roll Hall of Fame.

The Police - Roxanne
Now you can have a go at playing the song using this backing track.