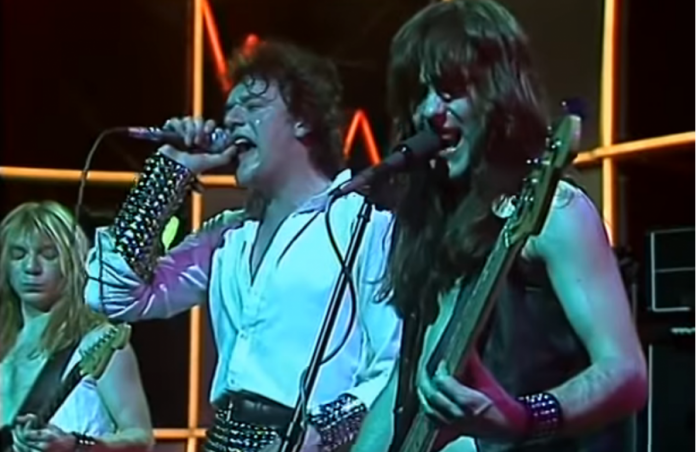 Prowler is the opening track from the self titled debut album by Iron Maiden released in April 1980.

Prowler guitar lesson is a long lesson for quite a short track but there are a number of sections in the song that I wanted to cover in some depth t help you play the sections correctly. This lessons covers all the main guitar parts played by Dave Murray and at the time Dennis Stratton.

Of course I have referred to most of the 2nd guitar parts as Adrian Smith, as it wasn’t long after the recording of the album that Adrian joined the band.

Although Iron Maiden have since criticized the quality of the album’s production, the release was met with critical and commercial success, peaking at number four on the UK Albums Chart and helping the band achieve prominence in mainland Europe.

This is the band’s only album produced by Wil Malone (credited as Will Malone), who Iron Maiden have since claimed lacked interest in the project and effectively left them to produce most of the album themselves, which, according to bassist Steve Harris, was completed in just 13 days. Recording took place at Kingsway Studios, west London in January 1980, with the band taking time out from the 1980 Metal for Muthas Tour to complete the final mixes at Morgan Studios, northwest London in February. Before the sessions with Malone, the band made two attempts in December 1979 with two different producers while still a four-piece. Guy Edwards, the first, was dismissed as the band were unhappy with the “muddy” quality in his production, while Andy Scott was also dismissed after insisting Harris play his bass with a pick rather than his fingers. After these efforts, the band decided not to dismiss Malone as Harris described that they could “bypass him and [go] to the engineer”. The group criticised the quality of the production, although many fans still preferred the raw quality of the sound recording. Although AllMusic stated that this style was “clearly drawing from elements of punk rock”, Harris stated that the band despised everything about punk.

This was also the only studio album with guitarist Dennis Stratton, who, having been brought in as a last-minute placement, was dismissed due to “musical differences” after the band’s European tour in support of Kiss. Suspicions were first raised during Iron Maiden‘s recording, when Stratton added Wishbone Ash-esque harmony guitars and backing vocals reminiscent of Queen to “Phantom of the Opera”, of which the rest of the band immediately disapproved and had removed. Although Stratton stated that he was not “trying to push the band in a new direction”, Harris commented that it “really pointed up the difference between Den and us”, after which he began to notice that “Dennis was so much more into playing stuff like “Strange World” than he was “Iron Maiden” or “Prowler”, because it was more slow, melodic … when he was soloing on one of the heavier songs, it wasn’t with quite the same passion”.

0
Run Silent Run Deep is a track from the album No Prayer for the Dying, the eighth studio album by Iron Maiden. Released in...