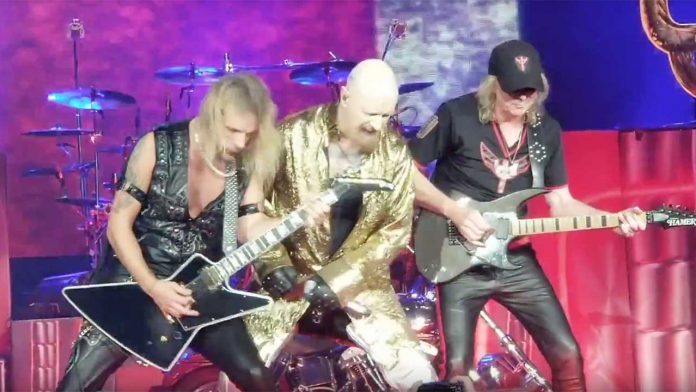 Firepower is the title track from the Firepower album by Judas Priest. Released in 2018.

Firepower is the first studio album since 1988’s Ram It Down to be produced by Tom Allom and the first one with Andy Sneap as co-producer. The album sold around 49,000 copies in the United States within its first week of release, debuting at No. 5 on the Billboard 200 chart, making it the band’s highest-charting album in the US. Music videos were made for “Lightning Strike”, “Spectre” and “No Surrender”.

Faulkner described the songwriting process as “free and really relaxed”, and that the writing and recording ideas from Redeemer of Souls remained the same, but was slightly different in terms of his guitar performance. He also says that it wasn’t a conscious thing on his part to revisit the band’s classic albums for inspiration. Faulkner explains that some of the melodies and the ideas for Firepower were already written a long time ago. He cites the songs “Rising From Ruins”, “Evil Never Dies” and “Sea of Red” as his favourites. When Allom and Sneap were selected to produce the album, Faulkner explained that it was “one of those lightbulb-moments, because it was never been done before with Priest but it just worked out great. It could have gone horribly wrong with clashing egos and things like that, but it was a great marriage of a classic producer and a more modern producer. They were really instrumental in getting the sound and the energy right for Firepower and I think that they did a fantastic job.”

When recording the album, Faulkner used a white Gibson Les Paul that he had used on prior Judas Priest tours for distorted rhythm parts. He used a combination of amplifiers, including a Marshall JCM800 and EVH 5150. For clean passages, he used a Fender Telecaster through a Roland JC-120. Glenn Tipton recorded the album primarily his signature ESP Viper and his old custom Hamer models, as well as a variety of Stratocasters. For amplification, he primarily used an Engl Invader but also experimented with EVHs and Marshalls. He improvised his leads on the album while Faulkner both improvised and composed his leads.

Firepower received generally positive reviews from music critics. At Metacritic, which assigns a normalised rating out of 100 to reviews from mainstream critics, the album has an average score of 77 based on 11 reviews, indicating “generally favorable reviews”. At AnyDecentMusic?, that collates critical reviews from more than 50 media sources, the album scored 7.1 points out of 10, based on 10 reviews. The album made several publications’ lists of best albums and top metal albums of 2018.

How T Play Beyond The Realms Of Death – Judas Priest – Premium

How To Play Rocka Rolla By Judas Priest

How To Play Exciter By Judas Priest

How T Play Beyond The Realms Of Death – Judas Priest...

How To Play Rocka Rolla By Judas Priest

0
"Rocka Rolla" is the debut single by Judas Priest, first released in August 1974, and later released as the title track of their first album the...
Judas Priest Online Guitar Lessons

How To Play Exciter By Judas Priest

0
"Exciter" by Judas Priest from their 1978 album Stained Class. Exciter is the opening track and is an early example of speed metal. According to former...
Judas Priest Online Guitar Lessons

How To Play White Heat, Red Hot By Judas Priest