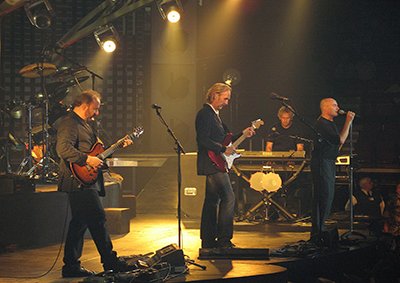 Entangled was released as a single in 1976 taken from the Album Trick Of The Tail.

The recording features 3 guitars which meant that when played live Rutherford and Banks would both play Guitars.

Though not a regular song on the live tours, entangled still remains a popular song with both young and Old Genesis fans.

The reason i selected Entangled is that Steve Hackett plays this song live using his Gibson Le Paul. and not is regular classical guitar.

“Entangled” originated from a piece by Hackett that Banks particularly liked and went on to write the chorus and closing synthesiser solo. Hackett also wrote the lyrics which Collins thought had a Mary Poppins feel to them. Rutherford recalled that Hackett “started writing verses which were very airy-fairy and then he came down with a bang”.

A Trick of the Tail is the seventh studio album by English progressive rock band Genesis. It was released in February 1976 on Charisma Records and was the first album to feature drummer Phil Collins as lead vocalist following the departure of Peter Gabriel. It was a critical and commercial success in the UK and U.S., reaching No. 3 and No. 31 respectively.

Following Gabriel’s decision to leave the band, the remaining members wanted to carry on and show they could still write and record successful material. The group wrote and rehearsed new songs during mid-1975, and listened to numerous audition tapes for a replacement frontman. They entered Trident Studios in October with producer David Hentschel to record the album without a definitive idea of who was going to perform lead vocals. After the search for a singer proved unfruitful, Collins was persuaded to sing “Squonk”, and the performance was so strong, he sang lead on the rest of the album.

In a 11/12/2013 interview with classic rock music journalist Ray Shasho of examiner.com, Steve Hackett said this about the origin of “Entangled”… Ray Shasho states “One of my favorite Genesis albums is …A Trick of the Tail (1976) which was the first release without original frontman Peter Gabriel. I had surgery and a two week stint in the hospital a few years back and a song that came into my mind during that time was “Entangled.” Was being in the hospital the premises of the song?” Steve Hackett replied… “It was really the psychiatrist couch. Whether you place it in a hospital or somewhere else, it was the idea of drifting in and out of consciousness. I remember when I first had the lyric ready and I showed it to Phil who was going to sing it and he said this has got a Mary Poppins feel to it … Over the Rooftops and Houses. Indeed, the whole world of Disney cartoons and the attendant music was a huge influence on Genesis. Certainly throughout the 70’s, beyond that … possibly less so for them, but then I really shouldn’t comment on what they did post Gabriel and post me.”

If you enjoyed this lesson and would like to take online lessons with me please contact me using the form below.

How To Play Ripples By Genesis

0
"El Dorado" is the second track from Iron Maiden's 2010 album The Final Frontier. El Dorado is the band's forty-first single, and the only one from...
Judas Priest Online Guitar Lessons

0
“Gangland” is a song by Iron Maiden, written by drummer Clive Burr and guitarist Adrian Smith. It is the seventh track from the 1982...
Classic Rock Online Guitar Lessons

0
Attack Of The Mad Axeman is a track from the album MSG. The second album by Michael Schenker Group. The band was formed in 1979...