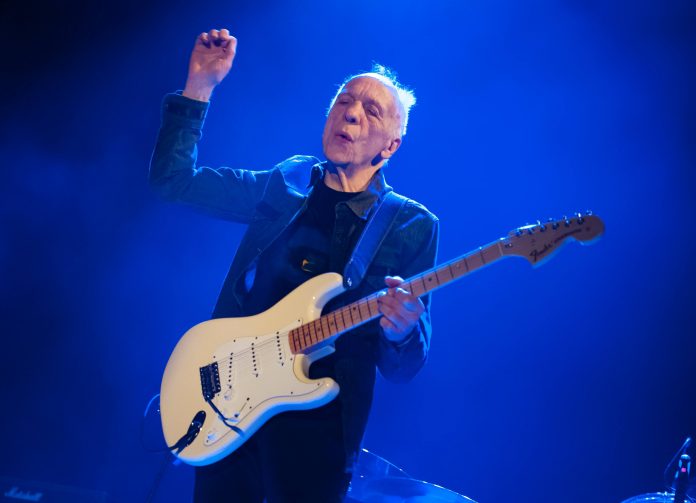 Learn how to play Daydream by Robin Trower featured on the 1973 album Twice Removed From Yesterday.

Daydream was written in the key of C#minor, in the chorus it switches to Bm and you play Bm pentatonic scale for the solo’s. for this version I play the song in standard tuning but the original studio recording Robin tuned down a half tone.

Robin Trower’s equipment has changed over the years as more new technology appears on the market. However back in the 70’s when Daydream was recorded the setup was fairly basic. In those days amps didn’t have effect loops so all effects where ahead of the amp running directly from the guitar to the pedals then into the amp. So to try and get near the sound make sure this is also the case.

During a tour with Jethro Tull, Robin Trower arrived early for a sound check and found Martin Barre’s Fender Stratocaster (which Barre used for slide playing) propped up against an amplifier. Trower picked up the guitar, plugged it in, and with a shout which resounded around the auditorium he yelled, “This is it!”. “I then switched to Strat” he says. “Up to then I had been playing Les Pauls.”
Trower in 1975

Since then Trower has been an ongoing proponent of the Fender Stratocaster. He currently uses his custom-built Strat (made by the Fender Custom Shop) which comes in black, arctic white and midnight wine burst. The guitar is equipped with a 1950s reissue pick-up in the neck position, a 1960s reissue in the middle position, and a Texas Special at the bridge. Other features included a custom C-shaped maple neck featuring a large headstock with a Bullet truss-rod system, locking machine heads and a maple fingerboard with narrow-spaced abalone dot position inlays and 21 frets. The Strats he plays live are an exact model of his signature guitar, which is entirely unmodified.

For his first two albums, his guitar was tuned in Standard Tuning EADGBE. Starting from the third album, he detuned the strings a semitone to an Eb Tuning (Eb Ab Db Gb Bb Eb). It is reported that during live performances, his guitar is tuned a full step down to a DGCFAD tuning.

Trower uses between one and three 100-watt Marshall heads with four to six cabinets on stage. While he usually uses two JCM 800s and a JCM 900, he also links 100-watt Marshall Plexi heads. In studio sessions, Trower uses a mix of amplifiers, such as a Fender Blues Junior and Cornell Plexi Amplifers models to acquire different tonality. Recently, Trower has been using Marshall Vintage Modern 2466 heads live.

He has recently been using Fulltone pedals and effects. He favours the OCD, Distortion Pro, Fat Boost, CLYDE Deluxe Wah, Deja Vibe 2, Soul-Bender, and a BOSS Chromatic Tuner. He runs his Deja Vibe into his distortion pedal to get his famous tone. He was given his own signature Fulltone Robin Trower Overdrive in late 2008.

Here are the tabs for Daydream: