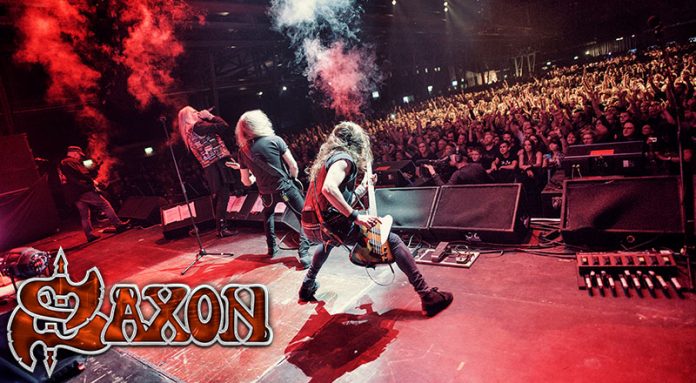 Title track from the album Crusader released in 1984. The album sold over 2 million copies.

Crusader was written co written by all the members of Saxon.

Bassist Steve Dawson has said that “In England, there’s a paper called the Daily Express, and on the logo at the top of the paper, there’s a crusader, and there was a car made by Ford called a Cortina Crusader. That’s what started it off. We just liked the name “Crusader”. We didn’t have any connotations of what it meant as far as history goes, but we just liked the name “Crusader”, so we just wrote the lyrics to fit the title, really.”

My premium channel has a more in depth look at this song including backing track and tablature for both guitars.

Eduardo Rivadavia of AllMusic said that although by the time they released the album, “the band had obviously stopped leading the New Wave of British Heavy Metal with its aggressive, blue-collar biker anthems”, the album “as a whole offers a slight improvement over the previous year’s Power & the Glory from an overall songwriting perspective”. Canadian journalist Martin Popoff considered Saxon’s turn to “a low-cal, kinder, gentler metal… a well-conceived experiment” and denied those who called the album “a failure” and “a bald-faced commercial maneuver”, finding the album “refreshing if more than occasionally flawed.”

The album reached No. 1 in the metal charts in Sweden, France and Germany. It peaked at #18 in the UK Albums Chart. It also charted in the U.S. Billboard chart.

While previously exhibiting a strong presentation from start to finish, Saxon has generally put their best foot forward during the opening moments of each album, and this proves to be doubly so in this album’s case. The haunting ambient sounds of wind howling, horses neighing and battle cries sounding to the tune of war horns lay the groundwork for what is one of this band’s more iconic metal anthems and title song “Crusader”, emerging from a droning, folksy clean guitar intro that may well have inspired the signature epic intros often employed by Running Wild to a crushing, militaristic march reminiscent of Black Sabbath’s “Heaven And Hell” with about double the heaviness factor.

Everything about this song is on point from the sense of tension and buildup between the verse and chorus sections and Biff Byford’s raunchy yet tuneful vocal delivery, perfectly embodying that sort of heroic heavy metal visual that would continue to be a staple of the style in subsequent decades. Truth be told, this song’s greatest flaw is that it is so iconic that is steals much of the remainder of this album’s thunder in a manner fairly similar to how the massive title song of Rush’s 2112 did to an otherwise respectable collection of songs that followed.

Opinions may vary as to whether Saxon’s lighter late 80s sound was solid or poor, but it’s a pretty massive stretch to lump this album in completely with what followed it. True, that early days rawness that had a degree of influence on Metallica is almost completely absent from this album’s presentation, but it’s no less a metal album than, say, Diamond Head’s Lightning To The Nations or Tokyo Blade’s debut from the previous year. It could be said that a lot of hopes were dashed over this album not sticking with the epic feel of the opening for at least a few more songs and much of this having a bit more of a party hearty sound rather than a soundtrack to Christendom retaking the holy land in a conceptual package, but this seems more a product of historical revisionism regarding the NWOBHM rather than a true assessment of what it was, namely a gradual evolution of metal out of the confines of its hard rock roots. Saxon seemed a bit more prone to return to their rock roots rather than shed them as the 80s unfolded, but it’s definitely a mistake to lump this in with the material that would follow, or to treat it as anything other than a solid collection of fist-raising anthems that, while not as impact-based as their seminal material, are definitely worth of the Saxon legacy.

If you would like to book a lesson with me please complete the form below:

How To Play Princess Of The Night By Saxon

How To Play 747 Strangers In The Night By Saxon

How To Play Princess Of The Night By Saxon

How To Play Motorcycle Man By Saxon

How To Play 747 Strangers In The Night By Saxon