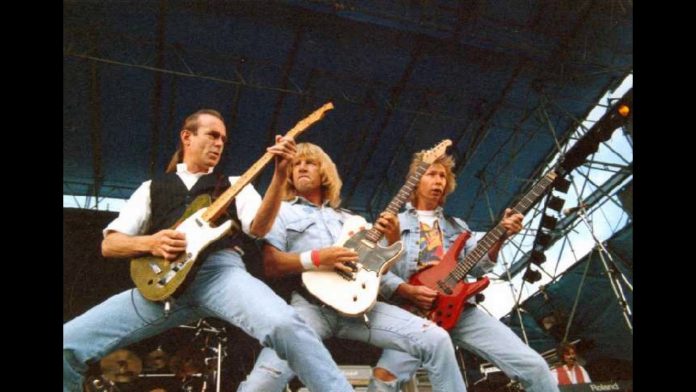 How to play Caroline by Status Quo. The song is in the key of F and contains the three chords the band are famous for: I, IV and V. The song was originally a slow shuffle until Rick Parfitt sped up this guitar intro and turned the track into the fiery opener we know today.

The Caroline was written by band leader Francis Rossi and roadie / harmonica player Bob Young on a table napkin in the dining room of a hotel in Perranporth, Cornwall, in 1971. A demo was cut with Rossi playing guitar and bass, with Terry Williams on drums. The group changed the arrangement from a slow blues song, doubling the tempo, and recorded it mostly live using their stage gear and amplifiers. On the single release, the song fades out, while the album version is about thirty seconds longer and has a conclusive ending.

The song became one of the opening numbers in Quo’s live setlist for over 25 years. It was the second number played at their Live Aid gig in 1985 and it inspired Apollo 440’s 1999 single “Stop the Rock”.

Caroline was reprised, in 2014, for the band’s thirty-first studio album Aquostic (Stripped Bare). It was featured in the ninety-minute launch performance of the album at London’s Roundhouse on 22 October, the concert being recorded and broadcast live by BBC Radio 2 as part of their In Concert series.

The Hello! album, and this song in particular, were a giant leap for the band, as they earned plaudits in the British music press for their material and for their invigorating live shows. In Melody Maker‘s review, they stated: “Status Quo have finally hit the big time with their raw and rorty brand of rock and roll.”

“Caroline” became the opener at their shows.

Rick Parfitt’s guitar intro became a Quo signature. Rossi recalled to The Guardian: “He came up with the riff during a rehearsal, and I played against it. That always happens between us; it’s like a conversation on guitars. We recorded it sitting in a semi-circle, doing take after take after take, thinking we’d get it right eventually. It wasn’t about finesse – it was about capturing something.”

When Bob Young proposed the line, “Together we can rock & roll,” Francis Rossi had an odious reaction, as it sounded very trite and cliché. He couldn’t find a suitable alternative, however, so the phrase made it into the song.

Whatever You Want, Roll Over Lay Down, Down Down

How To Play What Your Proposing By Status Quo

How To Play Mystery Song By Status Quo