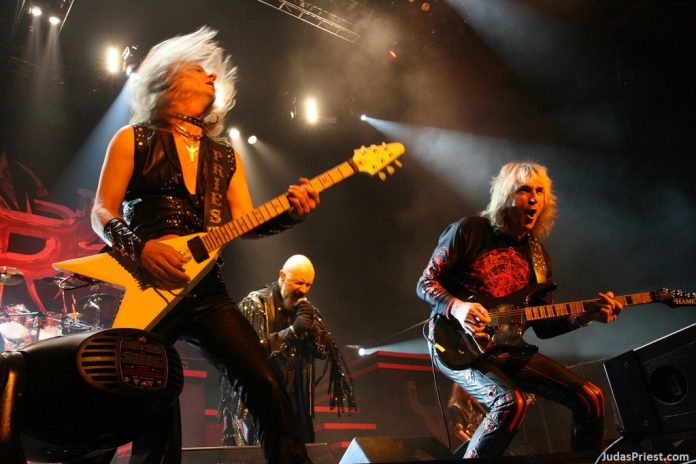 This lessons teaches you how to play Bloodstone written by Judas Priest, the lesson covers all the guitar parts written by Glen Tipton and KK Downing.

my third guitar lesson from the album Screaming for Vengeance.

It is the eighth studio album by Judas Priest. The album, considered the band’s commercial breakthrough, sold in excess of 5 million units worldwide and has been certified double platinum in the United States of America as well as platinum in Canada.

The guitar solo lesson can be found in the premium channel Bloodstone Guitar solo click on the Link and check it out!

Screaming for Vengeance was recorded at Ibiza Sound Studios, Ibiza, Spain (during this period, it was commonplace for UK-based musicians to record in continental Europe for tax purposes) mixing and overdubs were done at Beejay Recording Studios and Bayshore Recording Studios in Coconut Grove, Florida. Stylistically, Screaming for Vengeance showcased a harder, heavier sound than British Steel and saw the band quickly reverse direction back into straight heavy rock after the melodically styled direction of Point of Entry. The album also marks the first time a Priest drummer played on more than 2 Judas Priest albums, with Dave Holland having also played on British Steel and Point of Entry.

The album’s most commercially successful track, the single “You’ve Got Another Thing Comin‘”, was a last-minute addition. According to guitarist K. K. Downing, “We were quite happy with the album, but decided late on that we could add one more song. I know we had some of the parts, but we set about completing “Another Thing Comin'” during the mixing sessions at Bee Jay studios. It came together quite quickly, and I seem to remember that we all had a good feeling about it, as it did sound like a good driving song and possibly a good radio track.” Rob Halford expressed surprise at the song’s success, saying “that track was buried. Normally the tracks you think are going to do stuff are at the front end of the release. But our friends at Sony said, ‘We’re going to go for this song.’ And we didn’t really know what was going on. But then the feedback was coming over: ‘Hey, the record’s buzzing in this town and that town,’ and it just took off.”

The World Vengeance Tour began shortly after the album’s release in July 1982 and focused on North America during the summer and fall, Priest not performing in Europe until December 1983. This emphasis on US audiences was in order to establish a solid commercial foothold there, and in particular because “You’ve Got Another Thing Comin'” became a major hit. That and “Electric Eye” became live setlist staples and some of the band’s most performed songs. “Devil’s Child” has also been performed on various tours between 1982 and 2008. For comparison, “Fever” was only played at the first two 1982 shows. The 30th-anniversary release of the album in 2012 came with a DVD of a live show recorded in May 1983 at the US Festival in California on the last date of the Screaming For Vengeance Tour. During the US tour to support the album in 1982, Judas Priest were supported by bands such as Iron Maiden, Krokus, and Uriah Heep.

How To Play Judas Rising By Judas Priest

How To Play The Ripper By Judas Priest

How To Play Grinder By Judas Priest

How To Play Judas Rising By Judas Priest

0
Judas Rising by  Judas Priest. It is the opening track on the band's 2005 album Angel of Retribution. The song is about the Judas Priest...
Judas Priest Online Guitar Lessons

How To Play The Ripper By Judas Priest

0
The Ripper Is a Song From The Sad Wings Of Destiny Album released in April 1976. The Ripper was written by Glen Tipton. An early Judas...
Judas Priest Online Guitar Lessons

How To Play Grinder By Judas Priest

How To Play Tyrant By Judas Priest

0
Tyrant from the Sad Wings of Destiny studio album by Judas Priest, released on 23 March 1976. How to play Tyrant by Judas Priest. This video...
Judas Priest Online Guitar Lessons

How To Play Beyond The Realms Of Death By Judas Priest