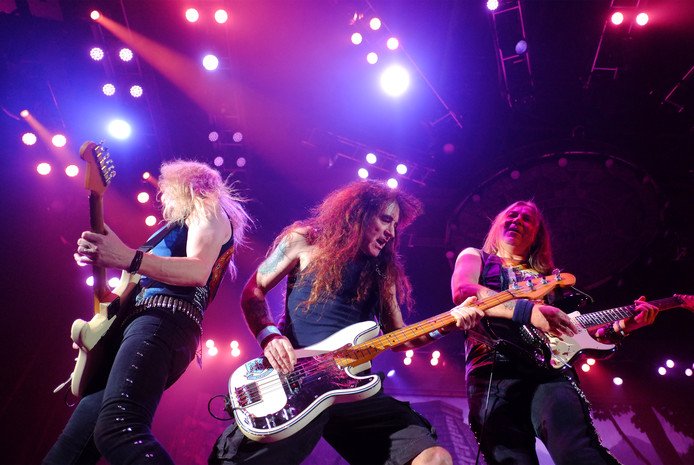 22 Acacia Avenue is a track from the album The Number of the Beast which is the third studio album by Iron Maiden. It was released on 22 March 1982.

22 Acacia Avenue from the album Number Of The Beast was their first to feature vocalist Bruce Dickinson and their last with drummer Clive Burr.

This is the second installment of the ‘ Charlotte the Harlot’ series of songs, which began on the very first Iron Maiden album. It is a complex and non-standard song, with several parts which differ radically from each other both in lyrical perspective and musical style. Yet these individual parts combine well into a cohesive whole, making this one of the most creative and unique songs in the metal genre as well as one of Maiden’s classic tracks.

’22, Acacia Avenue’ is originally an Adrian Smith song, from the time he was playing in his own band, called Urchin. Adrian recalls years later, in an interview with Mick Wall, how it all started and what triggered the birth of the song as we know it:

“One of the first things I wrote was ’22 Acacia Avenue’, which of course ended up in a slightly different form on the Number Of The Beast album. I wrote that when I was 18, but I ended up working on it over a period of years with various different line-ups I had of the band. But it was weird how it came to end up as a Maiden song.

Urchin did a gig in the local park and we played ’22 Acacia Avenue’, and it probably sounded completely different than the version we would later do in Maiden, but the weird thing was, Steve Harris was at the gig. I didn’t even know him then, but he remembered it when I joined the band, years later. We were getting stuff ready for Number Of The Beast, and out of the blue Steve turned to me and said, ‘What was that song you used to do in Urchin?’ and he started humming it and it was ’22…’. I mean, it had changed quite a bit since then, and we probably ended up changing it quite a bit again by the time we did it in Maiden, but it was weird how he’d remembered that one song all those years. We probably didn’t even play well that day, and were probably really down afterwards, but because we had a go and did our best someone in the audience remembered. That’s why it always pays off to do your best. Even if it feels like a dismal disaster at the time, you always come away with something from it.”

You can find the tabs below but before you go there if you enjoyed the lessons why not sign up for a free online guitar lessons with me.

0
Run Silent Run Deep is a track from the album No Prayer for the Dying, the eighth studio album by Iron Maiden. Released in...
Iron Maiden Online Guitar Lessons

How To Play Brave New World By Iron Maiden