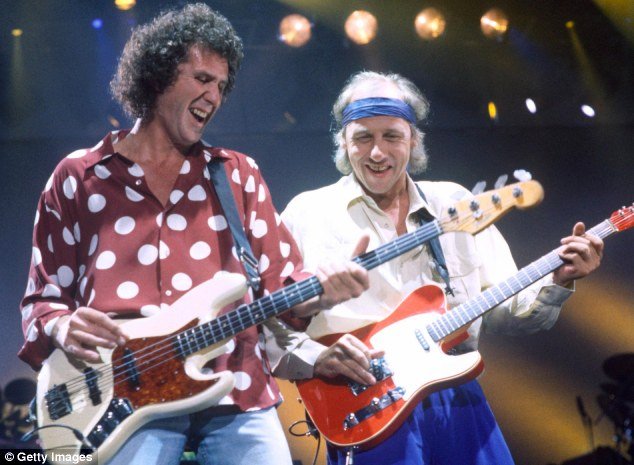 Dire Straits co-founder John Illsley isn’t planning to let the absence of frontman Mark Knopfler and other band members sour his time at the Rock and Roll Hall of Fame inductions this week in Cleveland.

Illsley did reveal that keyboardist Alan Clark’s web site post that he, Illsley and Fletcher would perform “an unplugged version of ‘Telegraph Road'” was not, in fact, true. “That’s not going to happen,” Illsley said. “That’s Alan having a bit of fun. I was hoping people weren’t going to take it too seriously. I wouldn’t perform without Mark there, so it’s as simple as that, really. If Mark’s not there, there’s no point.” Dire Straits has been dormant since 1992, after touring to promote its 1991 album On Every Street.

So why is Knopfler — whose brother and fellow guitarist David Knopfler also isn’t coming — a no-show? “He just didn’t feel like coming, it’s as simple as that,” says Illsley, who co-owns the Dire Straits band name with Knopfler. “It just didn’t appeal to him, and I appealed to him on several occasions. I said, ‘Look, I’d love you to get your head around this.’ He said, ‘Look, I just can’t do it, John. I’m really sorry. It’s a great honor for us and all the rest of it, and I just can’t get my head around it,’ so I’ve just got to respect it. He’s got his reasons, which he really doesn’t want to share with me which is unusual because we’ve shared most things over the years.”

Illsley adds that a Dire Straits performance during Saturday’s (Apr. 14) ceremony “would’ve been quite complicated. When you look at the structure of the band over the last 40 years it’s been quite a mixed bag of musicians and people involved, and just trying to sort that out and make sense of it… (Knopfler) said, ‘Look, I just can’t deal with it. I don’t really want to deal with it.’ So I said, ‘OK, I’ll go over, accept the award on your behalf and all the rest of the guys that aren’t there and that’ll be it. So that’s what’s happening.”

Illsley noted that he does have “room in the case” to bring Knopfler’s induction trophy back to England. He’s also starting to accumulate items for the Rock Hall to exhibit in Cleveland, and he plans to make the best of the induction weekend.

“I’m very proud of being inducted,” he says. “I think it’s fantastic for the band. I think it’s fantastic for all the musicians who have worked with us over the years, who have been part of the journey… and all the producers and engineers we worked with over the years. And I think it’s wonderful for all the people who bought the music and came to see the concerts and stuck with the band all these years. That to me is the most important side of it, so that’s what I would like to acknowledge when I get there is the fans. They make everything happen.”